Why are cats scared of fireworks?

Why are cats scared of fireworks?

To us fireworks can be fun, thrilling and spectacular. But for a cat they can be terrifying and the more often that a cat feels frightened by them the worse his fear can become.

Fear is normal and necessary for survival

It may seem odd to us that an animal can be frightened of something that doesn’t hurt them, but when exposed to something like a sudden loud sound of unknown origin it is normal to experience fear and for the body to prepare itself for what might be a genuine physical threat.

When confronted by something sudden, loud and unexpected the sympathetic nervous system is activated and chemicals are released into the blood stream that prepare the animal for ‘fight or flight’. It does this in a number of ways, most notably by increasing heart and respiratory rate, which increases blood flow to muscles and oxygen intake. I’m sure many of us have experienced that unpleasant feeling of pounding heartbeat, gasping, shakes and sweaty palms when something has made us ‘jump out of our skin’.

So why do cats become increasingly fearful of fireworks and we don’t?

Cats have one of the widest ranges of hearing amongst mammals, enabling them to hear the very high pitched sounds made by mice and other small rodents, as well as almost all the sounds that we can hear. They also have very sensitive hearing, so much so that not only can they hear the calls of very small animals but also their movements. When we consider this, then it is possible that sounds that are loud to us could be even louder to a cat, and may even contain other ‘scary’ sounds that we are unaware of.

A cat cannot identify where the sound comes from

One of the major differences between us and animals is that we know what fireworks are. Although our first reaction to a loud sound can be activation of the fear response, once we discover what the sound is and where it came from we can relax and even enjoy the show. But a cat does not know what a firework is so it cannot identify what the sound is or where it comes from. Therefore the cat has to remain fearful and ready to fight or run away at high speed in case it is something dangerous.

An animal can become accustomed to a sound if it is predictable. In other words, if it is always the same, occurs at regular intervals, and nothing harmful occurs in association with the sound. But fireworks are highly unpredictable; the type, volume and interval between each sound can vary tremendously. So instead of becoming accustomed to the sounds a cat learns that the frightening thing will happen again, but not when, or how loud, or how scary it will be. This results in increased sensitivity and a high level of anxiety in between the frightening events. It also means that recovery is delayed because the cat can only relax and recover fully once he is certain that all the scary noises have stopped.

Sensitisation and generalisation to other sounds and stimuli

A cat that is already frightened of fireworks may then learn to fear other stimuli (sights, sounds, smells) associated with fireworks. Increasing anxiety may also develop associated with the location and/or time of day where and when the frightening sounds were experienced. Plus, a cat can become frightened by other sounds that are similar to fireworks even if they are not as loud, for example a door closing, something being dropped on the ground and other everyday household noises. Fear also increases because every time that the cat experiences fear he becomes increasingly sensitised, so the more fear he experiences the more ‘sound sensitive’ and fearful he becomes.

Trudi Atkinson is a full member of the Association of Pet Behaviour Counsellors (APBC) and a Certificated Clinical Animal Behaviourist (CCAB). She runs a behaviour referral practice covering South West UK dealing exclusively with feline behaviour problems. She initially qualified as a veterinary nurse in 1986 and spent several years in veterinary practice before undertaking further study and gaining a post graduate diploma in companion animal behaviour counselling from Southampton University in 1999. As well as helping cat owners and their pets with behaviour problems, Trudi has also contributed to behaviour and veterinary textbooks and has presented several talks on the behaviour of pet animals, especially cats. 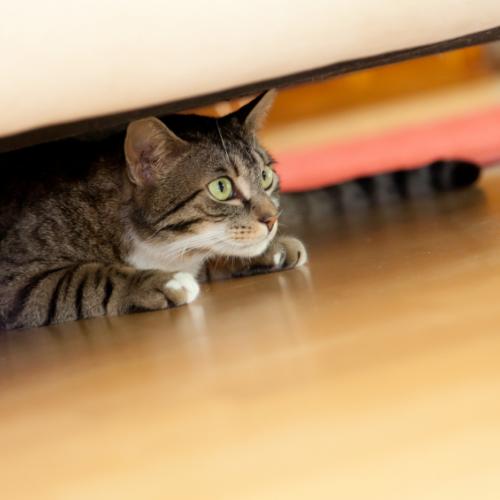